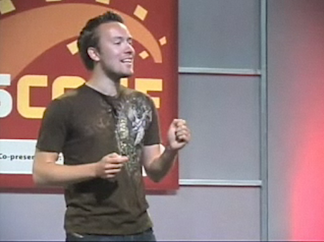 Both David Hansson and Chad Fowler have announced that videos of the keynote presentations given at RailsConf 2007 are now available to view online. The downside is that you only see the speakers and not their slides or accompanying code, so keep that in mind before digging in too deep. The best presentations are David's keynote and Ze Frank's (though Ze's is totally irrelevant in topic, naturally).