It’s been a couple of months since the last job round up but the Ruby Inside job board has been hopping! There are 14 live listings to go over today and they’re not all in San Francisco. Jobs in Denver and Maryland bring in a bit of interesting variety.

A tweak to the format now that Ruby Inside has gone all “tumblelog” on you: I’ve decided not to include blurbs about every job in the listings since if you’re interested in a company or the location is suited to you, you’re going to click through and read the extended information anyway. Read More 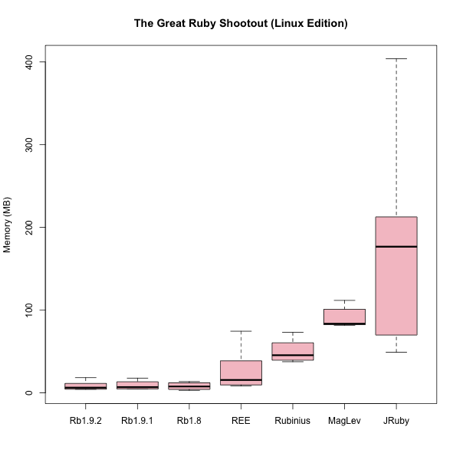 Antonio’s findings and observations are interesting and well worth a read (particularly the parts about memory consumption) but if you’re in a hurry, the conclusion is that Ruby 1.9.2 RC2 and JRuby 1.5.1 are almost joint first place for fastest Ruby implementation (but 1.9.2 takes it by a hair.) Ruby 1.9.1 and Maglev are then very close behind. Read More

I don’t understand the odd release candidate vs “1.0 is released” situation, but I’ve been following Eric’s progress for months and he’s put a lot of effort into making Redmine – a Ruby and Rails-based project management system used by the Ruby, RubySpec, Puppet and Typo3 projects, amongst others. Read More

Giles Bowkett (Ruby Inside’s top Ruby presenter of 2008) has released a series of free videos called “Secrets of Superstar Programming Productivity” that could interest some of you:

Giles’ style isn’t for everyone, but he shares some great tips in these videos and they’ve been very well received on Twitter. Enjoy! Read More

Florian Hanke got in touch to tell me that presentations and photos from the recent Euruko 2010 European Ruby conference are now online.

http://euruko2010.heroku.com/ shows off the presentations awesomely! Videos and slides are available for most of them and the video/audio is of a high quality. 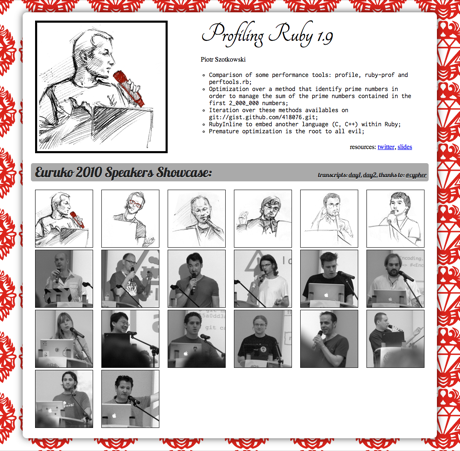 Rails Magazine is a well designed magazine dedicated to “fine articles on Ruby & Rails” and the recently released issue #6 is special in being nearly entirely Ruby focused. Topics covered include Haml, Sass, Capistrano, Hpricot, RubyConf India and RVM, as well as interviews with Sarah Allen and Michael Day (of PrinceXML).

The PDF version of Rails Magazine is free, but you can buy a print edition through MagCloud for less than $10. Read More

Ruby Tracker: An Online Dependency Tracker for your Ruby Projects

Ruby Tracker is a new webapp from EnvyLabs that tracks dependencies for your Ruby and Rails applications. It alerts you whenever libraries you depend on are updated or have new versions released. This is all in aid of keeping up to date.

Only two downsides: Ruby Tracker only works with projects that use Bundler and that are in an Internet-accessible Git repository (such as on GitHub). It can deal with private repositories, however, so your code doesn’t need to be publicly accessible.

Nathaniel Bibler has written a blog post explaining what Ruby Tracker is all about in case the idea doesn’t click for you immediately. Read More

Just last week, Ruby 1.9.2 RC1 hit the streets and Jan Lelis has had a dig through Ruby 1.9.2′s new Array and Enumerable methods with code examples for each. Read More

Some light comic relief for the weekend here. A group of Poland-based Rubyists from Applicake and PipeJump, along with special guests Jose Valim and Socha, got together after Euruko 2010 to shoot a Ruby themed lipsync video. It’s as horrible and funny as it sounds.

Any other Ruby or Rails shops willing to up the ante? CitrusByte, New Bamboo, EnvyLabs, HashRocket..? Read More

AdhearsionConf is a 2 day, free conference dedicated to Adhearsion, a Ruby-based VOIP/telephony framework developed by Jay Phillips. The organizers, Voxeo Labs, say that the event should also be streamed online.

The announcement of AdhearsionConf comes just a few days after the release of Adhearsion 0.8.4 which adds support for Asterisk 1.6 and ActiveLDAP.

I’m not involved with VOIP or the telephony scene, but everything I’ve heard about Adhearsion has been solid. If you want to do magic with your phone system, check it out. Read More

Ruby 1.9.2′s been slowly progressing through preview releases for a while now, so it’s great to see it ramping up for a final production release in August. You can read Yugui’s post here or see the NEWS file for RC1 which lists the changes from Ruby 1.9.1.

1.9.2 RC1 can be installed with one of the official archives or, more easily, with Wayne E Seguin’s popular RVM tool. If you already have RVM installed, it’s as simple as:

Don’t go rushing to deploy this on all your production boxes just yet, though, and when you do, test all of your libraries against it. Read More

It’s the latest in the series of “tech preview” posts from the Phusion guys (of Passenger/mod_rails fame). Passenger 3 still isn’t released but this time around they show off a new subsystem called “Passenger Lite” – a Nginx-backed “one line and you’re done” quick deployment option for both development and production environments. You can even serve an entire suite of apps from a single “instance.” Read More

Could Ruby be Apple’s Language and API Future?

Parveen pulls together some interesting threads about MacRuby, LLVM, and XCode to argue that Apple might be looking at Ruby as a future first-class language for their platforms.

I’m going to put myself on the line with a hunch here and say, yes, MacRuby is going to become a first-class language at Apple. Seriously. Apple’s investment in MacRuby is an interesting one for a company not known for frivolity in its crazy-scale R&D operations and there’s something brewing there. Either that, or they’ll disband the whole thing.

Parveen’s post is being discussed over on Hacker News where danudey makes a good point for why Apple would not make MacRuby a first class language:

Seems like reasonable thinking but I say “watch this space.” Read More

Gregg Pollack on Screencasting and Podcasting for Developers (in 10 minutes)

I’ve been itching to do some audio or video interviews on Ruby Inside – here’s the first! Gregg Pollack of EnvyLabs and Ruby5 (previously of RailsEnvy fame) is doing a screencasting and podcasting workshop at BizConf so I thought I’d ask him what that entails and how developers can benefit from learning about these media. (I like things short and simple so the interview is just 10 minutes long.)

Link to YouTube in case the video embed doesn’t work for you.

Products mentioned by Gregg include Screenr, Jing, ScreenFlow, and Camtasia for Mac. Gregg is also keen for you to get in touch with him if you have anything to promote on the Ruby5 podcast. Read More